In two days, I will end my 27th year of teaching physical education. I can retire after 30 years and,  Lord willing, probably will. It’s hard to believe it’s that close. It’s becoming more real. Some recent events have brought some of those feelings to the surface.

Today the seniors from our city high school went to the elementary schools they had attended. This is a new tradition for our school system. The soon-to-be graduates wore their caps and gowns and paraded through the halls of their old schools,while the elementary kids cheered for them. Since I have taught at the same school all these years, the students who came to our school were ones that I had taught. It was sweet and emotional for me. Some of the students walked quietly by with a smile, others stopped to give me a big hug. I had to hold back the tears.

Last week I attended a retirement party for a co-worker who was at my school when I started. Principals and other teachers from that long-ago past were also in attendance. I thought back to those early years. I was the youngest teacher at my school for three years and was surrounded by veteran teachers, many of whom were older and could have already retired, but chose to keep teaching. I learned quickly that friends don’t have to be the same age, as I bonded with some of the younger teachers as well as older ones.

I know teachers aren’t supposed to have favorites, but I’ve always had a favorite group that I taught. They were in 3rd grade when I started teaching. They were the class of 1998. I had them for three years and had a blast with them. Some of the girls started calling me “Mom” for fun and I ended up with 9 “daughters.” When they were in middle school, I took those girls on a “family reunion” day trip and we had a lot of fun. Most of them are my Facebook friends now. Here are some of them, from that trip. 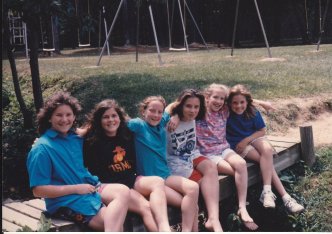 There is also the sadness from the early deaths of students and former students. I found this picture of Jordan Garber yesterday. She was a joy to teach. I wonder what she would have been doing today. There were others. Brad Baker died of Leukemia while still in elementary school. I also remember Pooh Green, Sean Supko, and Bobby Stieber, among others. When a person decides to be a teacher, they never expect to be grieving the loss of ones so young.

Many years ago we had a mentor program where willing teachers were paired up with students that might benefit from the relationship. I asked for Joey. In a few years, I became a buddy to his brother, Jaime, as well. They became like a part of my family and called my mom “Grandma.” I loved them then and I love them still. Here is an old picture of me with the boys and then our reunion picture from 2012.

Today I sat with some 2nd graders as they made posters for the departing 4th graders, who will do a “Grand March”through the school on Friday. I explained to the 2nd graders that 5th grade will be back in elementary school in two years, so they will be marching in 5th grade. With that, I realized that they will be the last group of my students that I will see march through the halls!

Many teachers say “I’d take that one home!” as students pass through our classrooms. Sometimes we know students  have needs that aren’t being met and we wish we could take them home, meet their needs, and love on them. I had the opportunity to do just that when I became a foster parent and then adoptive parent for two of my students. Though not all of my kids were my students, I became a mom through teaching. I wanted to be a foster parent to be a safe place specifically for kids from my school. My younger daughter will graduate the same year that I retire. She will walk those halls in her own senior march, as I will be winding down my last few days as a teacher. I think I will be a teary mess that day!

This week I got a wonderful card in my school mailbox, from my student Evelyn. In it, she talked about how she has been in my class for five years and how every year we’ve found something else that we have in common. This year it has been that we both love Dr. Who (t.v. show). Making connections and getting to know kids is a wonderful part of teaching. I’m realizing that the leaving will be a loss, along with the gain.

Three years can sound like a long time, but if they fly by like the last 27 have, it will be a very short time. I plan to make the most of it. After that, who knows. I am also aware that none of us are guaranteed tomorrow, so none of my time should be wasted or taken lightly. My life is a gift. My job is a gift. My students are gifts and treasures.